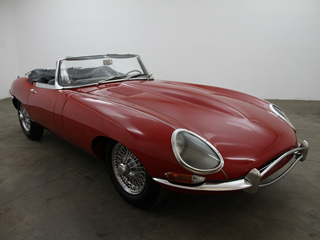 A symbol of the glory days of British motoring, the Jaguar XKE became Jaguars most iconic car. In fact, upon its release in 1961, Enzo Ferrari referred to the car as the most beautiful car ever made. Combining speed with style, the 1961 Jaguar XKE was introduced at the Geneva Motor Show. It was the product of more than five years of development and owed much in look and technology to the racing Jaguars that were being released in Coventry at the time especially the D-Type. The body utilized a monococque construction and at the rear, the E-Type would use an independent rear suspension, which was a separate unit in a subframe. This type of construction would go on to be used in Jaguars until the mid 1990’s. Available in both a two-seater roadster and a two-seater Fixed Head Coupe, the 1961 Jaguar XKE caused as much, or even more sensation than the XK120 had back in the late 1940’s. If youre considering the purchase of a 1961 Jaguar XKE and are looking for Buyer’s Tips, you’ve come to the right place!

First, the body of the XKE is partially unitized, which means that the body tub provides most of the structural strength to the car. For this, and obvious other reason, rust should be one of your main concerns while shopping for a 1961 Jaguar XKE. Because each panel functions both for support and appearance, a thorough examination for rust is imperative. Some of the key places to look include under the rear fenders, along the door sills, under the spare tire, and under the carpets. Brakes are also important when checking out a Jaguar XKE. All XKE’s have 4-wheel disk brakes with the rear ones being inboard. Any major work on the rear brakes will require removing the entire rear sub frame. This is just another item to be aware of when purchasing. Overall, the XKE cars are very restoration-friendly cars, with parts that are fairly easy to find.

A California classic car dealership with a reputation for fair and professional car deals, the team at The Beverly Hills Car Club would be delighted to assist you in your search for a 1961 Jaguar XKE. They invite you to tour their current inventory by browsing their website and welcome you to contact them with any questions you may have. They are just a phone call away and look forward to hearing from you soon. Connect today!