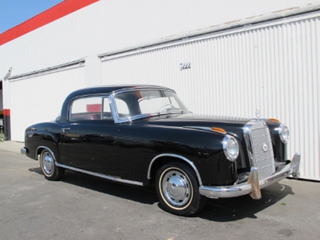 After the successful run of the Mercedes Benz Ponton series, the German automaker would release the W111 in 1959. Named the Mercedes Benz 220SEb, Sedan models would be built first, running from 1959 to 1968, while Coupes would be released starting in 1961. Designs for the 220SEb were focused on passenger comfort and safety, with the basic Ponton cabin being widened and squared off, and with a lager glass area to improve visibility for drivers. Front and rear crumple zones, a major milestone in automotive design, were also implemented, as were retractable seatbelts. On the exterior, the design was focused to appeal to the European and North American markets. The modern body featured characteristic tailfins that gave the models their nickname the Fintail. Buyers looking for information on the 1961 Mercedes Benz 220SEb Coupe will find a wealth of resources and Buyer’s Tips throughout this website.

Road and Track magazine called the Mercedes 220SEb one of the best-looking body designs to come from any German concern and the model was considered to be an immediate success with production numbers to prove it. From 1961 to 1965, approximately 14,173 Coupe versions of the 220SEb would be manufactured. Today, collectors enjoy the 1961 Mercedes Benz 220SEb Coupe (and other model years) for its power and grace, elegant trim, and for its ability to be maintained with little to no fuss. Parts are relatively easy to find and mechanically speaking, these cars are sound. Due to the high cost of restoration, however, purchasing a model in the best condition you can afford is always advised. Rust is also a major issue with these 220SEb models, and all examples you’re interested in should be inspected thoroughly. Some areas of concern include: the trunk floor, trunk seal lip, rear body panel seam, rocker jack points, floors under rear seat and around gas pedal, bumper mounts, headlight bucket, windshield flange, and the lower edge of the front cross-member.

For more Buyer’s Tips such as these for the 1961 Mercedes Benz 220SEb Coupe or any other postwar Mercedes, let the team at The Beverly Hills Car Club be your guide. As a renowned California classic car dealership, they look forward to sharing their knowledge and expertise with you and to introducing you to their inventory of exceptional European and American classic cars. Connect today!