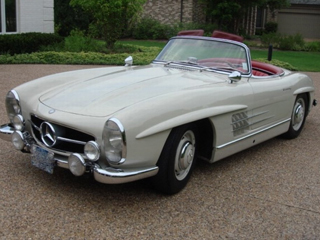 Imagine a breathtakingly beautiful sports car with sleek lines, strong curvature and unparalleled power, built to exacting standards with meticulous craftsmanship and only the highest quality materials. You’ve envisioned what Mercedes designers captured in the 1961 Mercedes Benz 300SL Roadster. First unveiled as a Gullwing Coupe at the 1954 New York Auto Show, unlike the Frankfurt or Geneva shows at which other Mercedes models typically made their debut, the two-seat fuel-injected sports car was directly derived from Mercedes’ highly successful 1952 racecar. Designed to thrive in the booming post-war American market, the 300SL did just that, selling 1,400 Gullwing Coupe units from August 1954 to May 1957. In 1957, the car would be redesigned and offered as the Mercedes Benz 300SL Roadster. Addressing all the bugs of the coupe, the Roadster was admittedly slower and heavier, but the styling was more civilized. It is important to note that the front fenders now had large cutouts to accommodate reviews headlights with integral fog lights, making the fenders on the Coupes and Roadsters not interchangeable. This is of particular importance if you are restoring a 300SL, as parts can be difficult to find.

There are a few important areas to consider and inspect when evaluating a potential 1961 Mercedes Benz 300SL Roadster purchase. First, because these cars are quite high in value, it is imperative to have any potential purchase inspected by a qualified Mercedes classic expert. Equally as important is buying the best condition and the most complete example you can find, as restoring these beautiful classics can be extremely expensive. Is it less expensive to buy a 300SL Roadster in great shape than it is to buy a poor or fair condition model and restore it?

A renowned California classic car dealership located in Los Angeles, The Beverly Hills Car Club has years of experience in the classic car marketplace and looks forward to sharing that knowledge with you. Connect with their team of professionals and classic car enthusiasts today to learn more and be sure to browse their online inventory to view any 1961 Mercedes Benz 300SL Roadster models currently available!