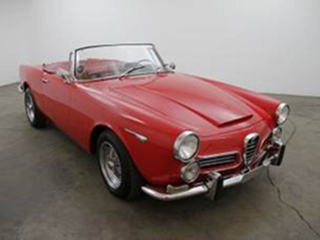 The Alfa Romeo 2600 was the manufacturers first post-war six-cylinder model and would be debuted at the 1962 Geneva Motor Show. Available in a Sedan known as the Berlina, a Coupe known as the Sprint, and a convertible known as the Spider, the 1962 Alfa Romeo 2600 would make good use of its powerful 130hp, 2,584cc engine. During this period, standard equipment included a five-speed gearbox and servo assisted disc brakes. The addition of four-wheel disc brakes, something new for Alfa, would not only make the Alfa 2600 safer, but would give it a real advantage in competition or sport driving. It would allow the Alfas to win through better braking when they couldnt achieve a win speed alone. Production of the Alfa Romeo 2600 would last until 1969, by which time 2,038 Berlina examples, 2,255 Spider examples, and 6,999 Sprint models would be produced. There would be no large production saloon Alfa to replace the 2600 until much later in 1979.

Perhaps the most appealing characteristic of the 1962 Alfa Romeo 2600 was the new six-cylinder, in-line 2.6L engine that was offered. Capable of 130hp in the Berlina and 145hp in the Spider and Sprint models, it was derived from the Giulietta engine. In fact, the Alfa Romeo 2600 has become historically significant as the last Alfa to be fitted with this traditional Alfa Romeo engine configuration. Later Alfa examples would boast a four-cylinder engine in order to move to more mass-produced cars after World War II. Whether youve been dreaming of owning an Alfa Romeo 2600 since you first saw one on the showroom floor or have recently fallen in love with their unique styling, technology and power, The Beverly Hills Car Club would be delighted to assist you in finding the classic Alfa Romeo you desire. Specializing in the sale of European and American classic cars of all makes, models and conditions, their Los Angeles classic car dealership has a wide variety of inventory for classic car lovers of all types and budgets.

For more 1962 Alfa Romeo 2600 Buyers Tips or to explore The Beverly Hills Car Club inventory, please do not hesitate to browse this website at your leisure. Should you have any questions or would like to schedule a time to view one of these special classics in person, their team of professionals is just a phone call or website inquiry away. Connect today to get started and to be one step closer to seeing the Alfa Romeo you desire in your garage or private collection.