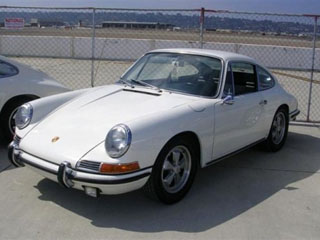 Since its introduction in 1963, the Porsche 911 has undergone continuous development to become one the flagship of the Porsche brand. Though Ferry Porsche thought his first six-cylinder production car would have a long run when it was introduced, even he couldn’t have fathomed that it would endure well into the 21st century. Distinguishing an early Porsche 911 such as the 1964 Porsche 911 from later year models can be relatively easy, as they offer 4.5 inch steel wheels and the Porsche script on the base of the engine lid uses connected lettering. These short wheelbase models had torsion bar covers immediately behind the rear arches, chrome windshield wipers and horn grills, and ran on triple choke solex carburetors until early 1966. The early 1965 to 1966 models also offered buyers wood trimmed steering wheels and a wooden lower dashboard. As all enthusiasts know, the Porsche 911 would go down in history as one of the greatest automotive lines in history. It is easy to understand why so many continue to search for the ideal 911 for their collection.

Interestingly, when the announcement was made in 1963, Porsche had named the car the 901. The car was later renamed the 911 because Peugeot had a copyright on all 3-digit car model numbers with a zero in the middle. Designed by Ferry Porsche, the 911 featured an air-cooled, six-cylinder opposed design in which the cylinders bolt onto the crankcase, which allowed for increased displacement. When looking to buy a 1964 Porsche 911 or any 911 model, there are a few important areas to check out. First, rust. Because of the Porsche 911’s unit-body, rust can be very expensive to fix, particularly in the pre-galvanized models prior to those of the mid-1970s. Some of the most important areas to check include the jack points and torsion bar tubes, the seams and edges of doors, trunk and hood, and the floorboards. Chain tensioners in the pre-1984 models are also known to wear out and suddenly collapse. Knowing if the chain tensioners have been replaced can save you a lot of money in your restoration or maintenance bill. These are just a few of the tips offered by The Beverly Hills Car Club, a California classic car dealership that has assisted countless clients find and sell Porsche 911 models of all years, conditions and locations.

When you’re ready to explore the options available to you among 1964 Porsche 911 models, connect with their team today. Only 232 examples of the 1964 911 were built and less than 50 are known to exist today. Let the experts at The Beverly Hills Car Club connect you with the classic you desire. Connect today!