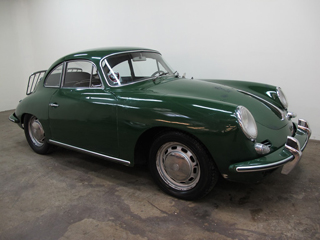 The Porsche 356C was introduced in mid-1963 and, as such, the 1965 Porsche 356 falls into this classification. In fact, the 356C was the last of the Porsche 356 variations and ran from 1963 to 1965 and saw approximately 16,668 units come off the production floor in Germany. Offering disc brakes as well as an option for the most powerful pushrod engine ever produced by Porsche, the 95hp sports car continued to see in North America through 1965, whole in Europe sales stopped earlier. Interestingly, the last ten 356’s cabriolets were assembled in early 1966, yet were named 1965 models. One of the best ways to determine a 1965 356 (and other Porsche 356C’s) from their 356B predecessors is by the flat hubcaps. Prior to the 356C, the 356A and 356B used a more protruding hubcap, while the new flatter ones were used to accommodate for the new disc brakes and bolt pattern. Many purists suggest the purchase of a 356C, as it encompasses all the changes and upgrades that were released over the 15-year production period of the 356.

There are a number of items that need to be checked out when purchasing a 1965 Porsche 356, particularly one that is said to be in mechanical working order. While the 356 engines are generally long lived, always check for good oil pressure, any visible oil leaks an excessive smoke. Secondly, when you start the car from cold, check the generator and oil pressure lights to ensure they turn off immediately. If running properly, the 1965 356 should sound like a well-oiled sewing machine. Listen for knocking or sputtering. You will also want to change the gears to ensure smoothness, which will give you an idea of the 356’s synchromesh. If you’re looking for a restoration project, rust will be of particular importance to you, as it can be quite costly to repair. Additionally, remanufactured bumpers are quite expensive and originals can be hard to find. Do your homework before purchasing.

For more Buyer’s Tips such as these or to view the 1965 Porsche 356 models currently in inventory, The Beverly Hills Car Club invites you to browse their website. A California classic car dealership with a reputation for fair, honest and professional car deals – connect with their team today to get started in your search. They are happy to help you find the car of your dreams. Connect today!