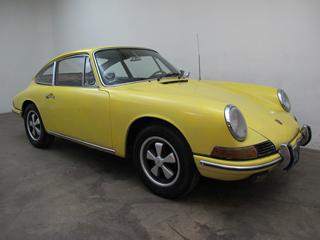 In September 1965, Porsche ended production of the illustrious 356, replacing it with the Porsche 911. Because the 6-cylinder 911 was moved to the high end of the market, the elimination of the 356 left a gap in Porsche’s model lineup. A cheaper alternative was needed, and thus arrived the Porsche 912. The first 1965 Porsche 912 was released in Europe and the United States in mid-1965 and was fitted with the 1600 SC engine from the previous 356 models. A five-speed gearbox and superior aerodynamics made the 912 a great addition to the Porsche lineup. The 912 was also much more economical than the 911 and averaged approximately 25 miles per gallon versus 16-20 mpg with the 911. A more basic trim for the 912 also reflected its price point. Those interested in buying a 1965 Porsche 912 should expect to find a plastic trimmed dash instead of Teak, the absence of a clock and oil-pressure lamp, and unlike the 911, the 912 did not offer the optional gas heater. Another identifying mark, wheels on the 912 were painted rather than chrome.

For today’s classic car buyer, the 1965 Porsche 912 is an interesting prospect. The model generally costs less than 911 models from the same era and is ideal for those who don’t want or need the power of the 911’s flat-six engine. The California classic car dealership professionals at The Beverly Hills Car Club have the following Buyer’s Tips for the 1965 Porsche 912. As with any old Porsche, carefully check for rust on both the chassis and body. These 1965 911 models did not benefit from the rust-proofing that Porsche introduced in the 1970s, and extensive rust repair is usually cost-prohibitive due to the 912’s relatively low value compared to other classics. Water leaking from the weather-stripping can cause rust problems around the windshield, in the doors, around the pedal assembly, in the rear seat buckets, and in the floor pan. Be sure to check these areas thoroughly. It is also important to mention that because the 912 shares many of the same body and trim pieces with the 911, they can be expensive and hard to find. Because these were entry-level cars during their time, many owners did not take care of their 912 models the same way 911 owners did. Be sure to find a 912 that is in the best condition you can afford to avoid costly repairs.

For more information on the 1965 Porsche 912 or any classic, connect with the professionals at The Beverly Hills Car Club. Their team is standing by to assist you and looks forward to helping you find the classic you desire. Connect today!