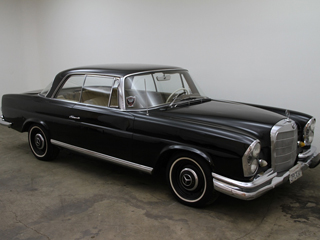 Mercedes replaced the W111 sedans in 1965 with the newer W108 series. Offering fresher styling, curved side glass, and no visible sign of the earlier fintails, these new models also received various mechanical updates. The most notable change was the move to the M129 engine. The 1966 Mercedes Benz 250SE replaced the earlier 220SE in late 1965, however, it proved to be short-lived. Acquiring a reputation for high oil consumption and valve train noise, the M129 engine that offered 2,496cc was replaced in 1967 by the M130, which offered 2,778cc. While both engines had Bosch mechanical fuel injection, the M130 provided an additional horsepower boost and stronger mid-range torque. Interestingly, both were over-matched by the weight of the W111, particularly in stop-and-go traffic.

Characterized by their elegant and timeless design and generously proportioned windows, the 1966 Mercedes Benz 250SE and its sister models were known internally as W108 and W109 saloons. Today, buyers often consider the 1966 Mercedes 250SE for its style and overall reliability, as these make great everyday and weekend drivers even today. Are you considering the purchase of a 1966 250SE? The team at The Beverly Hills Car Club specializes in finding the most unique and sought-after European and American classic cars. From offering Buyer’s Tips to closing deals, they are a Los Angeles classic car dealership that is renowned for its smooth and successful transactions. They invite you to browse their current inventory of classics and welcome you to contact them with any questions you may have.

Don’t see the 1966 Mercedes Benz 250SE you’re looking for? Contact the team at The Beverly Hills Car Club today to discuss your specific car desires. It would be their great pleasure to track down the auto of your dreams. They look forward to hearing from you soon and to building a lasting and trusting relationship. Connect now.