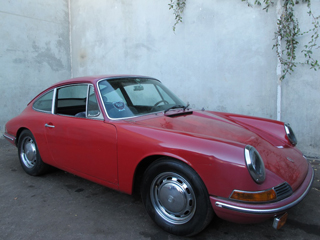 The early Porsche 911's are generally referred to as those from 1964 to 1968. These have a shorter wheelbase than the 911's built in 1969 and after, and torsion bars can be found next to the wheel well. A 1966 Porsche 911 and other early models can also be distinguished by headlights with glass lenses, exterior door handles that opened via an exposed push-button type handle, the absence of side marker reflectors, Hella 128 fog lights mounted through the bottom half of the front bumper, a vertical structural strip running under the rear engine grille, and (on sunroof models) drain slots above the rain gutter on the back side windows. If this is not enough to help you determine an early model short wheelbase 911, there were several unique characteristics inside as well. These include chrome instrument bezels with green lettering, ceiling mounted rearview mirror, a one-piece under the dash knee guard, pleated door pockets, and push buttons to open the doors from the inside.

One of the main items of consideration when buying a 1966 Porsche 911 – whether as a restoration project or mechanically sound driver – is rust. Particularly in the models that were made prior to the galvanized bodies on the mid 1970's, the 911's were prone to rust. While this may not stop you from purchasing, it is imperative to know the extent and location of any rust so that you can make a knowledgeable decision regarding the cost of fixing the problem areas. Additionally, the pre-1967 models (as well as later models) are known for having problems with the timing chain tensioners. While many early 911 owners have replaced their old tensioners with Carrera tensioners, doing this on a pre-1967 model can be extremely expensive. It is best to know whether or not they have been replaced on the model you’re looking at. As with all classic cars, having a third-party inspection is a great idea and will point out problem areas such as these. Lastly, ask for documentation on history and maintenance. This can be valuable during any restoration and can also increase value should you decide to sell the car later on.

The California classic car dealership professionals at The Beverly Hills Car Club invite you to browse their online inventory to view the current 1966 Porsche 911 models available to you. Don’t see what you’re looking for? Contact their team today to discuss your specific needs. They have the industry connections and resources to help you find and secure the car of your dreams. Connect now!