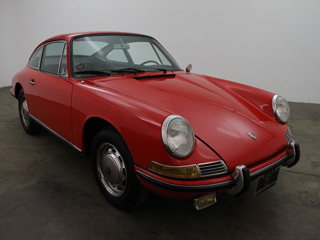 In late 1966, the first major advance to the Porsche 911 was released: the 911S. With this, Porsche returned to its historic three-tier lineup of Norma, Super, and Carrera, respectfully represented by the 912, standard 911, and the new 911 S or “Super.” The 1967 Porsche 911 Super offered a more powerful engine with 158hp and alloy wheels from Fuchs in a distinctive five-leaf design. You can also identify a 1967 911 model by its nameplate. Prior to 1967 the “911” designation was diagonally across the lower right corner of the engine cover and the PORSCHE script was in one piece at the bottom. These early Porsche 911 models are perhaps some of the most sought after, as they were low-production autos compared to the later years of the series. The Targa version was also introduced in 1967 and would become a staple in the lineup for years to come. If you’re considering buying a 1967 Porsche 911 – whether a Super or not – there are a number of items to consider. The California classic car dealership professionals at the Los Angeles based Beverly Hills Car Club have the following recommendations and Buyer’s Tips.

Finding the right 1967 Porsche 911 for you can be a long process, particularly if you are interested in one particular year, make and body style. The team at The Beverly Hills Car Club – a renowned California classic car dealership – is often asked what questions buyers should ask of the sellers. Here are a few Buyer’s Tips on what to consider. First, how long has the owner had the car and what is their reason for selling it? Second, how many owners has the car had? Does the seller have any documentation regarding owner history? Next, what is the car’s condition? Is it restored or original? The pre-1976 cars demand more caution as these cars are not galvanized like the later year models and are prone to rust. Lastly, how was the car used? Was this a second or third car? Has it been garaged or stored for long periods of time? When is the last time it was running? The answers to these questions can help you decide whether or not to further delve into the 1967 911’s past.

As a Los Angeles classic car dealership with a reputation for assisting buyers with fair and honest car deals, it would be the great pleasure of The Beverly Hills Car Club to help you find the 1967 Porsche 911 of your dreams. They invite you to browse their online inventory and encourage you to contact them with any questions you may have. Even if you don’t see the car you’re looking for – they have the industry connections to help you find it! Connect today.