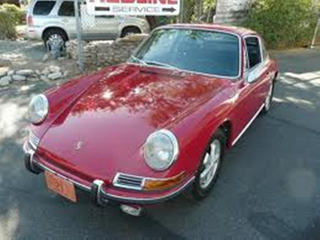 German manufacturer, Porsche, had big news for the 1967 model-year. Not only was it the first year of the semi-open Targa 911 model, which in addition to a lift-off roof came initially with a soft, folding rear window, the manufacturer also released a new model, the 911 S. The 1967 Porsche 911 S offered different timing, carburetion and cams to boost power from 148hp to more than 180hp. The chassis was also modified and bigger brakes were installed. Furthermore, an extra five pounds was saved from each corner of the car with the adoption of Fuch alloy wheels. The 911 S model went away in the United States for the 1968 model-year due to emissions concerns, and returned to the lineup in 1968 with mechanical fuel injection. If you’re thinking about buying a 1967 Porsche 911 S, you’ve come to the right place. Designed with you in mind, you’ll find a wealth of resources for those considering a 911S, including Buyer’s Tips and available models thanks to the team of classic car experts at The Beverly Hills Car Club.

One of the most significant mechanical components to take into consideration when purchasing a Porsche 911 S is whether you prefer an air-cooled engine or a liquid-cooled engine. Porsche purists generally swear by the air-cooled varieties, which lasted from the 1960s all the way to the 1998 model-year. However, there is no arguing that liquid-cooled versions offer greater performance and less engine noise in the cabin. You’ll also want to consider engine size, which grew gradually over the years, climbing from 2.0L (1964-1973) to 2.2L (1969), 2.7L (1973), 3.0L (1978-1983) and 3.2L (1989). This is except for the Turbo models, which sometimes offered larger engines than their counterparts. If you’re thinking about one of the early Porsches, including the 1967 Porsche 911 S, these short-wheelbase variants (1963-1969) have grown increasingly popular in recent years. While they are mechanically uncomplicated, raw and aesthetically pleasing, they are also prone to rust. This is especially true of those produced prior to chassis galvanization in the mid 1970s. These are just a few of the Buyer’s Tips you should keep in mind while exploring your 911 S options in the classic car market.

As a California classic car dealership with a worldwide reputation for fair and honest car deals, and for being a true resource within the classic car realm, the team at The Beverly Hills Car Club would be delighted to assist you in the search for your 1967 Porsche 911 S. Whether you’re looking for a model you can restore to its original beauty, an example that is already in showroom condition, or an everyday driver for your teenager, let their team of experts be your guide. They look forward to hearing from you soon and encourage you to tour this website to view available inventory. Connect today to get started!