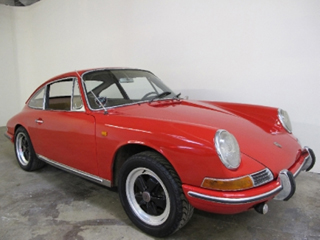 Unequivocally, the Porsche 911 is the most legendary sports car in history. Starting its life as the widely anticipated Successor of the Porsche 356 in 1964, the 911 would instantly storm the automotive world with its iconic styling and speed. Over the next three decades, the Porsche 911 would outsell other sports cars, outlast its younger counterparts, and would eventually become the longest produced sports car in history. Throughout the years, there would be numerous variations, engine upgrades and clever body styling changes that would continue to keep the car relevant in the marketplace. These variants make documenting the history of the Porsche 911 quite a feat; however, The Beverly Hills Car Club has the information you need on the 1967 Porsche 911 T to make knowledgeable buying decisions. Let’s take a look back at the 911 T, Porsche’s base-model 911.

First introduced in 1967, the Porsche 911 T was considered the base-model of the 911 lineup, running alongside the Porsche 911 S and the Porsche 911 E, and effectively replaced the 912. With this 1967 Porsche 911 lineup, Porsche would become the first German manufacturer to comply with strict U.S. exhaust emission control regulations. Inside the car, the interior was quite spacious when compared with the previous 356 models. Because luggage space was very limited, the back seats could be folded down to make additional room. Trimmed in vinyl, although leather was optional, the 911 was equipped with Recaro seats. Buyers would also find the characteristic 5-dial dashboard. While the dashboard and instruments never changed much, the dials were redesigned almost every year. If you’re thinking about buying a 1967 Porsche 911 T, always be sure to have a pre-purchase inspection and be sure to inspect for rust. Furthermore, it is always to your benefit to purchase the most complete and original example you can find, as restoration costs can be high.

When you’re ready to learn more about the 1967 Porsche 911 T, please do not hesitate to contact the team of classic car professionals at The Beverly Hills Car Club. Designed with you in mind, they welcome you to browse their website to learn more about these classic Porsches and to view their selection of online inventory. Questions? Connect with their team today to begin the search for your dream Porsche 911 T. They look forward to hearing from you soon!