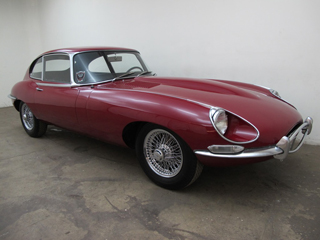 The 1968 Jaguar XKE most often falls into the Series 1 designation, although Jaguar itself does not officially recognize this name. Enthusiasts, to bridge the gap between the Series 1 and Series 2 cars and to mark the changes that were implemented to the XKE due to new United States regulations, use to this unofficial name. Similar to the 1967 Jaguar XKE, the 1968 met requirement for crash worthiness and emissions control. Rather than do all the changes at once, Jaguar implemented modifications gradually beginning in late 1967. Series 2 cars of 1969 had all the changes. Some of the changes included the elimination of the sloping glass over the headlights, changes to the intake manifold and carburetors, new cam covers, rocker switches instead of toggle switches and a collapsible steering column; some of which are found on the 1968 Jaguar. If you are interested in purchasing a 1968 Jaguar XKE, these are some of the items you can look for to ensure its originality.

Because Jaguar gradually mutated the Series 1 cars in the Series 2 cars over the period of two years, the 1967 and 1968 Jaguar XKE can be a bit more challenging than both their predecessors and successors from a maintenance standpoint. This is a Buyer’s Tip that should be taken into consideration when thinking about the right XKE model for your needs. However, the most damaging problem on any Jaguar is rust. Because the body is partially unitized, the body tub provides most of the structural support of the car. Each panel functions both for support and appearance. For this reason, buyers must approach cars with rust with caution. Some of the most rust-prone areas include under the rear fenders, along the door sills, under the spare tire and battery, and of course, under the carpets. While some rust is understandable given the age of these cars, make sure the rust on the car you purchase can be corrected within your desired budget.

A California classic car dealership with a strong reputation for honest, fair and professional car deals, the team at The Beverly Hills Car Club would be happy to speak with you about the 1968 Jaguar XKE and any models they have in their current inventory. Don’t see what you’re looking for? With their finger on the pulse of the classic car market, they can help you find the car you desire with ease. Connect today!