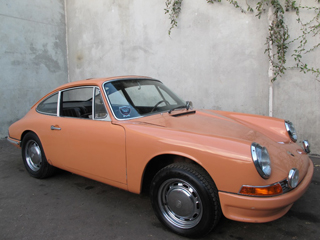 1968 was a big year for the Porsche 911 brand, as three new variations appeared: two for Europe, one for the United States, and both part of the world-renowned 911 “A-Series.” The American model was the 1968 Porsche 911 L, which replaced the standard issue 911 just after the model year began. The “L” stood for “luxury” and attached to what was basically a 911S with a normal-tuned engine. This was an up-market move for Porsche, as it sold for more than $600 higher than the previous year’s 911. Modifications had to be made to satisfy new safety and emissions standards brought about by the United States. These modifications included the add-on of side marker lights, which today helps distinguish U.S. models from others. Europe also received a 911L as well as a low-priced 911T or “Touring” model. Trimmed to Porsche 912 standards, the 911T offered 110hp, reduced compression, cast-iron rocker arms and cylinders, no crankshaft counterweights, steel wheels, and a lighter front anti-roll bar. Some of the recognition tips for a 1968 Porsche 911 include matte black wiper arms, rubber covered knobs on the dash, and (on U.S. models only) the 911s had tacked-on rectangular side reflectors in the front and back, a two-piece dash pad, and a rear-view mirror that was ceiling-mounted and of the break-away type.

If you’re looking to buy a 1968 Porsche 911 of any variation, you’ve come to the right place. The Beverly Hills Car Club – a renowned California classic car dealership – has the knowledge and industry resources to help you find and secure the car of your dreams. Options on a car easily increase value. Here are a few Buyer’s Tips for options that may increase the value of the particular 1968 911 you’re looking at. Options include: sunroof, Sportomatic transmission (first offered in 1968), tinted windshield, rear window defroster, a three-piece stainless steel muffler skirt, enamel Porsche crest on the steel wheels, Fuchs alloy wheels on non-S models, leather throughout, and a 100-litre fuel tank. For more information about the 1968 911 models available to you, please feel free to browse the online inventory of The Beverly Hills Car Club.

Should you have any questions or would like to view any of the cars you see here in person, do not hesitate to contact them at your convenience. Don’t see the 1968 Porsche 911 you’re looking for? Call them today to discuss your specific needs. They will work tirelessly and will use their industry connections to find the car you desire. Connect today!