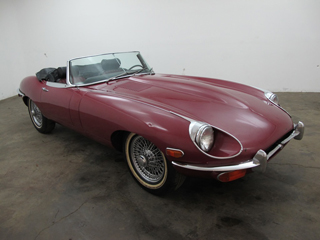 The 1969 Jaguar XKE marked the release of the Jaguar XKE / E-Type Series 2 models, which had all of the modifications required by the United States for safety and emissions control that were addressed in the Series 1 models. Manufactured from 1969 to 1971, from the front the Series 2 models can be recognized by a larger grill opening and the repositioning of the front signal lights. Brakes were also upgraded and radial tires became standard equipment on the 1969 Jaguar. As with the earlier Series 1 cars, the interior saw changes that included dash-mounted toggle switches replaced with rocker switches that were deemed safer in the case of an accident. From the back, the 1969 Jaguar XKE can be recognized by larger tail lights, which sat under the rear wrap-around bumper. Perhaps one of the most interesting changes one that is often modified back to original is the wheel knock-off nut. 1968 U.S. safety laws no longer allowed for a winged-spinner knock-off, and any model sold in the United States would have a hexagonal knock-off nut, to be hammered on and off with the help of a special socket that was included with the car from the factor. This hexagonal nut would be carried on into the later Series 2 and Series 3 cars, but would now apply to the home market as well.

The Series 2 XKE’s would see approximately 18,808 models released from 1969 to 1971, including Roadster, Fixed Head Coupe and Fixed Head Coupe 2+2 body styles. If you’re looking to buy a 1969 Jaguar XKE, the team at The Beverly Hills Car Club would be happy to assist you. The first Buyer’s Tips they would recommend would be to decide your budget early on, as well as the type of XKE you want to purchase whether a restoration project, mechanically sound model, or one of pristine condition. Knowing these things in advance will help you stay on track during your search. Additionally, they recommend having all Jaguar models inspected for rust and authenticity. This is something their team can assist you with. As a California classic car dealership with years of experience in the classic car market, they can help you find the car of your dreams. Take a few moments to browse their online inventory at your leisure to see the 1969 Jaguar models they currently have available to you.