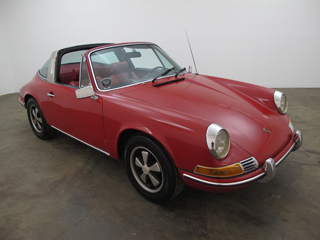 For the 1969 model year, the Porsche lineup expanded once again with the release of the mid-range Porsche 911E, which replaced the 911L. This new trio – the 911T, 911E, and 911S – would run for three model years. The initial US versions were: the 911T, which offered 110hp and a top speed of 110mph; the 911E, which offered 140hp and a top speed of 134mph; and the 911S, which offered 170hp and a top speed of 140mph. The 911S, being the most expensive at the time, was released with a base price of approximately $7,900 for the coupe version. Only the 1969 Porsche 911 T used carburetors. The new “E” model and the popular “S” model were both fuel injected. Mechanically similar to the system being used by Mercedes at the time, the fuel injected engine offered high performance with low emissions – a concern of the United States at the time. This was also the first year of the long wheelbase 911s, which came with flared fender arches. Options included sunroofs, tinted windshield, Sportomatic transmission, rear-window defroster, 10-spoke cast magnesium wheels (on the T model), chrome plated steel wheels, leather or sport seats, and a three-piece stainless steel muffler skirt, which hung below the rear of the car.

Finding a 1969 Porsche 911 can be an exciting time. Whether you’re looking for a restoration project to enjoy on the weekends or a pristine, fully-restored example of your private garage, the team at The Beverly Hills Car Club would be delighted to assist you in your search. As a world-renowned California classic car dealership that specializes in the purchase and sale of European and American classic autos, they have their finger on the pulse of the classic car market and can help you find the car you desire – no matter what make, model, condition or location. With the 1969 Porsche 911, the particular points of interest when buying should be rust, authenticity, and mechanical soundness. Rust is an important issue because the 1969 911 was manufactured prior to those cars being galvanized. Rust, depending on the extent and location, can be quite costly to repair. Authenticity can be determined relatively easily by matching chassis and engine numbers with Porsche records. Lastly, depending on the type of 911 you want to purchase, mechanical soundness should be checked. The chain tensioners are perhaps the most notable issue on the early 911's. If you can find a model that has had the original tensioners replaced with Carrera ones, that would be a great find.

These are just a few of the many Buyer’s Tips offered by the team at The Beverly Hills Car Club. To learn more about the 1969 Porsche 911, they encourage you to tour their website and to contact them at your convenience. They are standing by to take your call and look forward to helping you find the car of your dreams. Connect today to get started