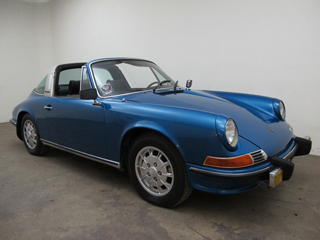 The 1970's Porsche 911's became quicker than the previous early models thanks to a larger bore that upped displacement to 2,165cc. Compression ratios stayed relatively the same, but horsepower and torque were higher across the board. To compensate, clutch diameter was also increased. Considered part of the E-Series, the 1972 Porsche 911 offered further increases in both displacement and wheelbase. The extra displacement came from Porsche’s desire to maintain performance among the increasing U.S. emission standards. California, one of the largest markets for the Porsche 911, was still requiring lower pollutant levels than other states and mandated that all cars be operable on low-lead 91-octane gasoline beginning with model-year 1972. Automakers in Detroit responded by lowering compression and thus performance, while European producers went to different pistons and heads. Porsche also lowered compression in the 1972 911, but the greater displacement more than offset that. All three engines showed output gains, so performance scarcely suffered.

There are a number of ways to spot a 1972 Porsche 911. For example, the 1972 911 offered a matte black engine grille, seat recliner bars, an oil filler flap below the right-side c-pillar, a 2.4 badge on the engine grille, rectangular side mirrors, and a leather grain vinyl dash. These 2.4-litre cars also got a new transmission, which was stronger and identified by its Porsche type number “915”. Buyer’s Tips such as these can be important in spotting an original 1972 Porsche during your search. For more information such as this, the team at The Beverly Hills Car Club welcomes you to tour their website at your leisure. Should you have any questions or would like to see any of their cars in person – they invite you to contact them today. As a California classic car dealership with a reputation for fair and honest car deals, it would be their pleasure to help you find the 911 of your dreams. Whether you’re searching for a restoration project to enjoy with your children, a mechanically sound weekend driver, or a pristine example of a 911 for your private collection – they can assist you.

The purchase of a 1972 Porsche 911 can be a very exciting time. Ensure you find the car you’ve always dreamed of by partnering with the team at The Beverly Hills Car Club. They look forward to hearing from you soon!