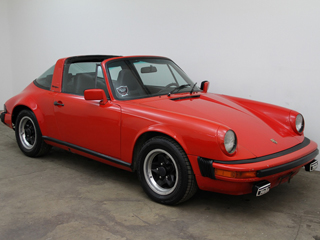 Often praised as one of the best Porsches for first-time classic car owners, the Porsche 911 is also one of the most iconic classics available in the marketplace today. Due to its high volume of production and incredible lifespan that stretches more than 50 years, the 911 offers a number of models, body styles and price points to choose from. The 1979 Porsche 911 is part of the second-generation, which is noted by the 911’s first major makeover. This “G-model” was built from 1973 to 1989, longer than any other 911 generation. It quickly became famous for its prominent bumpers, an innovation design to meet the latest crash test standards in the United States. Three-point safety belts also became standard equipment, as did integrated headrests to protect occupants. This generation of Porsches is also known for the 1974 unveiling of the first Porsche 911 Turbo, which would later become synonymous with Porsche performance, ingenuity and luxury. Interestingly, the previous year, 1978, was supposed to be the beginning of the end for the 911 as Porsche introduced the front-engine, water-cooled, V8 powered 928 as its replacement. Porsche would go on to produce the 911 for the next five decades.

If you are considering the purchase of a 1979 Porsche 911, you’ve come to the right place to learn Buyer’s Tips and to explore Buyer’s Guides offered by The Beverly Hills Car Club. One of the main things to look for on any classic 911 is the condition of the body and engine. Rust can destroy a 911’s unit-body and can be nearly impossible to fix. While models received extensive rust-proofing after 1976, it is still wise to give the body a thorough inspection. If you have your eye on a 1979 911 SC model, you’ll also want to watch for what is called an “exploding clutch.” The SC models produced from 1978 to 1983 used a rubber-centered clutch that would eventually fail and would send rubber pieces floating throughout the transmission. If the clutch is original, a spring-centered one should replace it. Additionally, it is wise to read-up on the 2.7L engine that has very well documented issues with heat. While many have been replaced or updated over the years to solve this cooling issue, the history of the engine is something you’ll want to explore and discuss.

To learn more about the 1979 Porsche 911 or any classic Porsche, the California classic car dealership professionals at The Beverly Hills Car Club are standing by to assist you. They encourage you to contact them at your leisure and look forward to helping you find the classic you desire. In the meantime, be sure to browse their online inventory to view the classics they currently have in stock. Connect today!