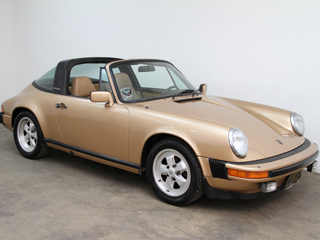 Starting with the 1982 Porsche 911, those who loved fresh air could now order the first full convertible 911 model, the Cabriolet. Based on the Targa body, the Cabriolet offered a manually operated canvas top with a zip-out rear window. Otherwise, the Porsche 911SC was virtually unchanged. The release of the convertible 911 would be one of the most successful in the car’s history. The introduction of the Cabriolet did caused sales of the Targa to slow due to its similarity, yet the Targa would remain part of the Porsche lineup for years. 1982 Porsche 911 models can be difficult to recognize when compared with previous year 1981 models, as little was changed overall. Available options during the time included sports seats, Berber cloth upholstery and leather upholstery. Many collectors also prefer the later 911SC models, as they were equipped with a 3.0L engine. Thanks primarily to its newer, more reliable engine, the 911SC can carry a premium price over the base 911 models. Whether you’re looking for a 911SC or a 1982 Porsche 911 Cabriolet or Targa, the team at The Beverly Hills Car Club can assist you in your search.

One of the most common Buyer’s Tips for the Porsche 911 is to purchase the newest car in the best condition you can afford, with the emphasis being on the condition. This is widely dependent on the reason for your purchase. If your father, for example, owned a 1982 Porsche 911 and you’re restoring it for him, then the newest 911 you can find would not be your goal. On the other hand, if you want to purchase a 911 as your daily driver or for a weekend grocery-getter, the newer 911 models, with the more reliable engines, would be a better fit. For some classic car buyers, having a limited edition or special release car is the goal. The 911 lineup has these types of models as well. The limited edition Silver Anniversary model, built to commemorate the 25th anniversary of the 911, would be an example. No matter what your classic car goals and budget, the California classic car dealership professionals at The Beverly Hills Car Club would be delighted to speak with you and to help you find the car you desire.

They invite you to browse the 1982 Porsche 911 models and other Porsche 911 models in their online inventory and encourage you to connect with them today to further discuss your options. Having assisted countless clients in the purchase and sale of Porsche 911 cars over the years, their experience and knowledge will help you navigate the classic car market. Connect today to get started!