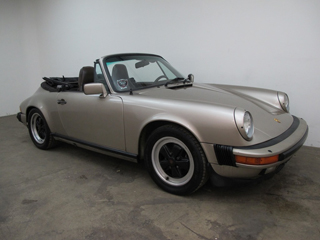 It seems almost impossible that for more than five decades Porsche engineers have been able to find ways to keep enhancing the 911. From its launch in 1964, the Porsche 911 has continued to not only stay relevant in the sports car scene, but has continued to evolve with a steady stream of improvements year after year. The 1985 Porsche 911, released twenty years after the first, proved this. During the 1985 model year, the Turbo Look option was extended to the Targa and Cabriolet. Buyers could now have all the exceptional styling and look of the Turbo, without the maintenance costs of the Turbo superchargers. Also new were standard power front seats (the driver’s was standard and the passenger’s at extra cost), updated shift linkage, a “safety” windshield, and central locking became an added option. Perhaps one of the most notable recent sales of a 1985 Porsche 911 includes a black-on-black 1985 911 Turbo with only 59,000 miles that was originally owned by American fashion designer, Calvin Klein.

Previously, in 1984, the 3.0L 911SC was replaced by the 911 Carrera as the sole model sold in the United States. A virtually all-new 3.2L version of the 911 flat-six engine now offered buyers 200 horsepower and Bosch’s Motronic fuel injection. Other than the addition of the Turbo Look cars, the 1985 911 was virtually unchanged. Whether you’re considering buying a 1985 Porsche 911 for your primary driver or have always dreamed of restoring a 911, there are a myriad of options available to you within the 911 series due to its lifespan of more than fifty years. The California classic car dealership professionals at The Beverly Hills Car Club encourage you to browse their online inventory at your leisure to view the 911 models currently available to you and welcome you to tour their website to learn more Buyer’s Tips for these and other classic cars. Should you have any questions, they are always just a phone call or website inquiry away.

As with all classic cars, one of the biggest Buyer’s Tips the team at The Beverly Hills Car Club can offer on the 1985 Porsche 911 is to have the car inspected by a third-party Porsche mechanic to verify the working order of all components. If you’re purchasing a 911 for restoration, be sure to have a complete understanding of all repairs and restorations that will be needed, as this will affect your bottom line.