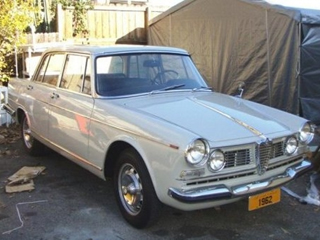 Like many of Alfa Romeos previous releases, the Berlina body style would be the first to release under the new Alfa Berlina 2600 series in 1962. It would use the chassis of the previous Alfa Romeo 2000 and was recognizable by the addition of two headlights in the front grille and by the reduction of the rear fins on the wings. Perhaps the most notable change, however, was the new six-cylinder engine. The inline-six boasted 2,584cc and gave the Alfa Romeo 2600 Berlina approximately 130hp, while its Spider and Sprint counterparts would reach 145hp. The Berlina would continue to use the five-speed gearbox with a column shift and front bench seat until 1965. Production of the Alfa Romeo 2600 Berlina would end in 1969 with approximately 2,038 units being produced. Another large Alfa Romeo saloon would not be offered until the Alfa 6 in 1979.

The Alfa Romeo 2600 Berlina was designed and built in-house by Alfa, while the two-door Sprint coupe was designed by Bertone and built by OSI, and the open two-door Spiders were designed and built by Touring of Milan. The 2600 Berlina engines are pretty reliable and robust, though many of the Alfa 2600 models suffered from head gasket issues, which have likely been addressed in any car still running today. This, of course, is something youll want to discuss with the seller. Another issue to be weary of is rust. All three models were made of steel rather than aluminum, which is prone to rust. Always check body panels, chassis, trunk and floors. Youll also want to be on the lookout for any repair jobs in these areas. Finding an area that has been repaired should not deter you from purchasing the classic Alfa, but youll want to ensure the repair was done well. These are just a few of the Buyers Tips that the team of classic car professionals at The Beverly Hills Car Club have learned over their years of experience in the classic car industry. Whether youre considering an Alfa Romeo 2600 Berlina for restoration or as an occasional or fair-weather driver, let their team assist you in finding the classic Alfa that best suits your needs.

While many enthusiasts believe the Alfa Romeo 2600 Berlina is largely overshadowed by many of Alfas previous and subsequent offerings, it has the true charm and pleasurable ownership experience of an original Alfa Romeo. Always secure a pre-purchase inspection and really do your research to understand the car youre interested in. Should you have any questions or would like to view any of the classic Alfa models in The Beverly Hills Car Club inventory, do not hesitate to contact their team today. They look forward to hearing from you soon.