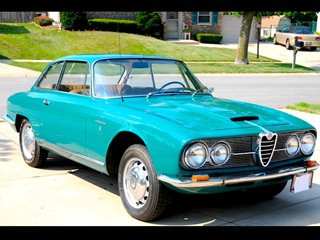 Alfa Romeo would introduce its 2600 model range at the 1962 Geneva Motor Show. Offered as a four-door Berlina sedan, a two-door Sprint Coupe, and an open two-door Spider, the Alfa Romeo 2600 would succeed the popular 2000 series. While the Berlina models were designed and built in-house by Alfa, the Alfa Romeo 2600 Sprint was designed by Bertone and built by OSI. Similarly, Spiders were designed and built by Touring. The Alfa 2600 Sprint, while bearing a family resemblance to the rest of the 2600 line, would gain an attractive bonnet duct. The engine, however, was the biggest change during this release. A new six-cylinder in-line 2,584cc engine was fitted and would boast 145hp in both the Spider and Sprint models. Derived from the Giulietta engine, a reduced bore and stroke and an additional two cylinders would help increase performance and power, as well as three carburetors in both the Spider and Sprint models. All 2600s would use a five-speed manual transmission with synchromesh on all gears. The Berlina would feature a column shift, while the Sprints and Spiders would receive a floor-mounted gearshift.

The Alfa Romeo 2600 Sprint is perhaps the most attractive and versatile offering in the 2600 range, as it features seating for four in an attractive grand touring body. Available amenities at the time included leather seating, electric windows, rear demister and two-speed wipers all of which can add value against a stock example in similar condition. When buying an Alfa Romeo 2600 Sprint, always consider the overall condition of the example. Rust can be an issue for these classics; check areas such as the body panels, chassis, trunk and floors. Also watch for the very rare Sprint Zagato known as the 2600 SZ. With just over 100 of these models manufactured, this special-bodied Sprint is one of the most rare Alfa Romeo models. Consider the condition of a Sprint Zagato carefully, as replacement parts can be difficult to source and your best bet would be to have new parts fabricated.

These are just a few of the Buyers Tips for the Alfa Romeo 2600 Sprint that The Beverly Hills Car Club team has learned over their years of experience in the classic car industry. Whether youre considering a 2600 Sprint for restoration or prefer a roadworthy model ready for weekend enjoyment, do not hesitate to connect with the team today. They also encourage you to tour their online inventory to view the classic Alfa Romeo models they currently have in inventory. Should you have any questions, they are just a phone call away.