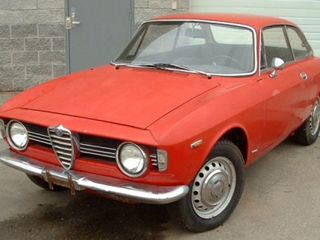 Alfa Romeo nomenclature can be quite confusing, particularly for models and ranges released during the 1960s. There is a 101 series Giulia Sprint and in 1963, the new Giulia Sprint GT based on the 105 series chassis with a short wheelbase. The 105 series Alfa Romeo Giulia Sprint GT Veloce was designed by Giorgetto Giugiaro and built by Bertone. While very similar to the original Giulia Sprint GT, the GT Veloce featured minor modifications to the engine, providing approximately 3 more horsepower but significantly improved torque. Production of the Alfa Romeo Giulia Sprint GT Veloce would run from 1965 to 1968. If youre looking for a Sprint GT Veloce, also known as the Sprint GTV, there are a few telltale signs that can help you distinguish this model from the GT. For example, the grille features black mesh and three horizontal chrome bars. The dashboard is similar to that of the Giulia Sprint GT with its tilted flat panel, however the GTV features imitation wood grain instead of a grey crackle finish. The front seats were revised to feature a mild bucket design, and the grille heart has seven bars instead of six. Lastly, look for stainless steel bumpers rather than chromed bumpers on the GT.

It is estimated that approximately 14,240 Alfa Romeo Giulia Sprint GT Veloce examples were made prior to the end of production. Once you have found the Sprint GTV that interests you, it is important to check for areas of rust or rust repair, as Alfa Romeos are prone to rust. Also of importance is the braking system. The early Giulia Sprint GT Veloce models featured the same Dunlop disc brakes as the Giulia Sprint GT. Later examples, however, saw ATE disc brakes as first debuted on the GT 1300 Junior in 1966. The ATE brakes are said to be more effective and offer a handbrake system on the rear brakes. These are just a few of the many items to consider when buying an Alfa Romeo Giulia Sprint GT Veloce. As with all classic cars of this age, it is always beneficial to have a pre-purchase inspection performed by a qualified mechanic and to seek the guidance of a classic car expert that can help you authenticate the originality of the example. Purchasing the best example you can within your budget is highly advised due to the cost of restoration.

For more information on the Alfa Romeo Giulia Sprint GT Veloce, The Beverly Hills Car Club encourages you to tour their website. Here you will find valuable Buyers Tips, model information and the ability to view their online inventory of European and American classics. Should you have any questions or need more information on a particular model, do not hesitate to contact their California classic car dealership today. They look forward to hearing from you soon and to helping you find the classic Alfa you desire.