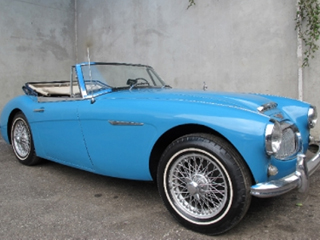 hile the Austin-Healey 3000 models are often most recognized for their size, the 3000 is considered by many to be one of the main precursors to the modern sports car emphasizing comfort and interior space as much as performance. If youre thinking about buying an Austin-Healey BJ7, there are a few key considerations to keep in mind. First, most of the inner body, bulkheads, and floorboards are welded to the chassis and are considered stressed surfaces. This means that a body-off restoration can be quite costly and very involved, as those pieces would have to be cut off and welded again. While full restoration is quite an undertaking, finding a model in the best condition with minimal rust can save you thousands of dollars and a considerable amount of time. Another consideration to make is breaking performance. From August 1961 a brake servo was also available as an optional extra. This greatly improved braking performance and ability. When choosing a BJ7 for purchase, finding an example with this extra upgrade can be a nice find.

or more Buyers Tips like these for the Austin-Healey BJ7, The Beverly Hills Car Club team welcomes you to contact them today. Based in Los Angeles, their team of classic car professionals has the knowledge, experience and resources to help you find the classic Austin-Healey you desire. They encourage you to browse their online inventory to view the Austin-Healey models currently available to you and welcome you to contact them with any questions you may have. They look forward to hearing from you and to helping you find the perfect Healey BJ7 for your garage. Connect today to get started!