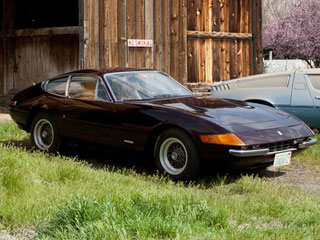 If you are looking to buy classic Ferrari Daytona autos, look no further! Better known as the Ferrari Daytona, the Ferrari 365 GTB/4 was perhaps one of the most famous Ferrari models of all time. Produced from 1968 to 1973, the Daytona was first introduced to the public at the Paris Auto Salon in 1968 and replaced the 275 GTB/4. Interestingly, the Daytona name was not given to the car by its makers at Ferrari, and was instead applied by the media and commemorates Ferraris 1-2-3 finish in the February 1867 24 Hours of Daytona with the 330P4. Although the car was a Pininfarina design, as with many previous Ferrari road cars, the 365 GTB/4 was radically different and resembled the sharp-edge styling of its Lamborghini competitors. Ferrari club historians estimate 1,406 models were produced including 158 right-hand drive coupes, 122 factory-made Spiders, and also 15 competition cars in three series with modified lightweight bodies and various engine tunings.

In 2004, the Daytona was voted top sports car of the 1970s by Sports Car International magazine. Motor Trend Classic also named the 365 GTB/4 and GTS/4 as number two in their list of the ten Greatest Ferraris of All Time. The car also gained much notoriety in the Miami Vice television series, as James Sonny Crocketts character had a 1972 Ferrari 365 GTS/4 Daytona or the Daytona Spider. Interestingly, the car used in the series was a replica built on a Corvette chassis. Ferrari executives were not impressed that their company and product was being represented by an imitation and sued for trademark infringement and dilution. The replica was eventually destroyed on-screen and replaced with a donated Ferrari Testarossa, the companys newest model at the time. Those looking to buy Ferrari Daytona autos should turn to the Beverly Hills Car Club for help, as these cars are today extremely sought-after and rare to find.

Please feel free to browse this website to learn more about 1960’s Ferrari models and to buy or sell classic Ferrari cars. The Ferrari Daytona is just one of the many classic and vintage European and America autos that the team can assist you with. Whether you’re looking to buy Ferrari Daytona cars or sell a Porsche, Mercedes or Austin Healey, they stand ready to assist you. Connect today to learn more!

For help buying, or to sell your vintage Ferrari, team with www.BeverlyHillsCarClub.com today. Our team knows exactly what makes these classic cars special, and will connect you to your dream car!