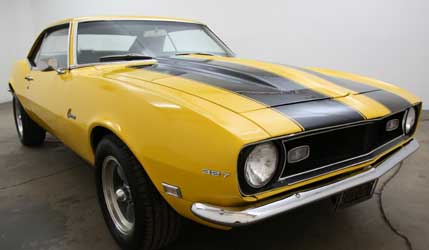 The Chevrolet Camaro First Generation was a powerful American muscle car that first hit the Chevrolet showroom floors in 1966 and saw production up until 1969. It was a two-door sports car with a 2+2 seat interior that was available as a convertible or a hardtop. Chevrolet made different versions of the first generation Camaro, each with different engine sizes and transmissions.

Every version had an option between a four-speed manual transmission, two-speed automatic transmission, and Turbo Hydra-Matic 350 three-speed automatic, which was released for the 1969 version of the car. There were also a number of different V8 and inline-six engines available, and sizes ranged from 3.8-liters all the way up to the 7.0-liter V8 COPO model; the 5.7-liter V8 engine that comes with the SS model is probably one of the most popular Camaro engines.

Looking to purchase a classic Chevrolet?

When it comes to American muscle cars, there are few that have the power and style of the Chevrolet Camaro First Generation model. Baseline six-cylinder models deliver power and performance, while V8 versions of this Camaro were able to breeze past most other cars on the road. The first generation Camaro typically came in four different versions, the baseline model, RS, SS, and Z/28. The Camaro RS was a cosmetic upgrade which could be added to any type of car. It gave the model a sportier look with upgraded head and tail lights, improved trim, and other features. The SS was the performance package. It came with a 350cu or 396cu V8 engine. The Z/28 was created to compete with the Trans-Am, which is why it received customized decals similar to the Firebird, as well as four-wheel power disc brakes and a 302cu V8 engine.

If you’re looking to add a first generation Camaro to your classic or performance car collection, give the Beverly Hills Car Club team a call today. They can assist you with finding any type of Camaro, from the baseline model to the high-performance sporting car. Whatever your preferences are, the professionals at the Beverly Hills Car Club can help you along the way. Call or visit their website today to learn more.