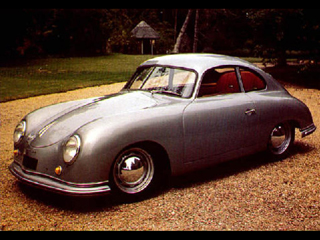 Often considered to be immortal by collectors, a rolling altar of sorts, the Porsche 356 represents the absolute, unwavering success of the Porsche brand. The first sports car to wear Stuttgart’s black, red and yellow shield, the 1949 Porsche 356 Pre-A is a historic automobile, revered, uniquely reliable and nearly recession-proof as an investment. Designed by Ferry Porsche, who had been working in conjunction with Volkswagen for some time, it was logical that the 356 Pre-A would be based on the Volkswagen Beetle, sharing much of the basic engineering and running gear. Porsche would build approximately 50 early 356s and pre-sales were encouraging despite high prices. From 1949 when it was debuted until it was discontinued in 1965, more than 76,000 356 Porsches would roll of the assembly line in Stuttgart. Perhaps as much as 50 percent of these would be exported to the United States, many of which have survived to this day.

Models prior to the introduction of the 356A in September 1955 are considered the Pre-A models. Its windscreen can identify the 1949 Porsche 356 Pre-A quickly. The Pre-A was produced until April 1952 with a two-piece windscreen that featured a rubber dividing seal down the center. Another giveaway that you’re looking at a Pre-A 356 Porsche is the way in which the doorsill panels curve under the car and the small rectangular rear lights. If you’re thinking about buying a 1949 Porsche 356 Pre-A, the classic car experts at The Beverly Hills Car Club are happy to provide you with the following Buyer’s Tips. First, it is important to remember that many of the Pre-A models, particularly the first 50, were hand built and because Porsche was a very small operation at the time and supplies were not always readily available, not all early 356 models are exactly the same. Furthermore, rust is a very important factor in the selection of any 356, particularly the early models. No rust protection was used while making these Pre-A models, so a thorough check is necessary. Lastly, and perhaps one of the most important Buyer’s Tips pertaining directly to value, is originality. There are a lot of kit cars and 356 replicas out there. Don’t get caught buying one of them thinking it is an original; you’re almost guaranteed to lose money!

When you’re ready, the Beverly Hills Car Club welcomes you to browse their online inventory to view the 1949 Porsche 356 Pre-A models currently housed in their showroom. Should you have any questions or would like to speak with one of their California classic car dealership representatives, please do not hesitate to call today. They look forward to hearing from you soon.