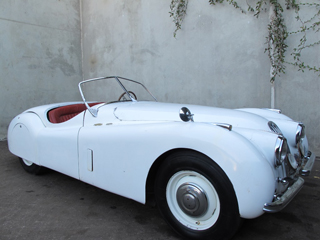 Searching for a 1952 Jaguar XK120? Learn more about the XK120 series here! The Jaguar XK120 was almost certainly never intended to become a volume production model. At the time of its unveiling in 1948, Jaguar had an engine it wanted to debut, but the large sedan for which it was intended was not ready. This car, the MK VII would later appear in 1950. In the meantime, in a desperate attempt to stir up excitement in the automotive industry for its engine and its post-war designs, the XK Open Two Seater Super Sports car was designed. Later named the XK120 due to its top speed of 120mph, the Super Sports would be designed as a show car for the 1948 Motor Show in Paris. Using a shortened version of the chassis that was designed for the MK VII, the brand new XK engine, and all the design notes that William Lyons had come up with during the war when no cars were produced, the XK120 quickly turned heads.

The rest of this story is now history. The car was an instant sensation, and orders overwhelmed productions capabilities so greatly that the car had to be redesigned in steel, rather than the original aluminum body, so it could be produced on a production line, as opposed to the largely hand-built prototype. The 1952 Jaguar XK120 was available as a Roadster and from 1951, as a Fixed Head Coupe. The Roadster was more sticks and bones, whereas the Fixed Head Coup offered luxury appointments including a wood-veneer dash and door trim, as well as leather seats. Today, both of these models are highly desired, however many favor the FHC with its luxury options. No matter what you’re searching for a 1952 Jaguar XK FHC for your weekend driver or a pristine, showroom condition 1952 Jaguar for your collection the team at The Beverly Hills Car Club looks forward to assisting you.

A popular choice among California classic car dealerships, contact The Beverly Hills Car Club today to learn more about the 1952 Jaguar XK120 options available to you. They look forward to hearing from you soon and to earning your trust and business. Connect today!