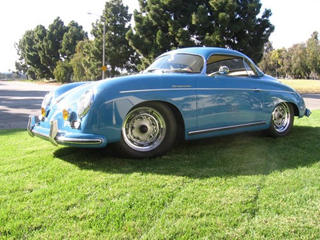 Elegantly designed yet wildly simplistic, the Porsche 356 was produced from 1948 to 1965 by the German automaker Porsche. The company’s first production automobiles, the earliest of the 356 models were based heavily on the Volkswagen Beetle, using many of the Beetle’s parts and components for production. Lightweight and nimble, the open-configuration Speedster was perhaps the most sought-after body style for the Porsche 356; it gave owners the open-air racecar feeling they desired. The 1954 Porsche 356 Pre-A Speedster was part of the “Pre-A” lineup that dated from 1948 to 1955. The production of Pre-A cars included approximately 1,900 Speedsters, of which it is estimated that 200 were from the 1954 production year. The Pre-A designation is actually an unofficial designation used by collectors and enthusiasts to distinguish between these early models and the 356A models, which were released in late 1955. It is important to note that, like most manufacturers, Porsche generally began building next year’s models after the August vacation break. Cars, for example, built in September 1954 were considered to be 1955 model year cars. This means that the year the car was built does not always correspond with the model year of the car. Always check engine, chassis and VIN numbers to verify production dates.

One of the best tips for buying a 1954 Porsche 356 Pre-A Speedster is to be fully aware of the condition of the car and its originality before purchase. Maintenance records will rarely be complete for a car of this age, so don’t consider this a major issue; however, a lack of history does deserve a more thorough inspection. The main issue to consider is corrosion, as cars of this age had very little rust protection and the 1954 Porsche 356’s rarity means that panels and chassis parts can be difficult and expensive to replace. Skilled labor is also hard to come by and can be costly for a full-body restoration. Consider these items when choosing a 356 to invest in.

For more 1954 Porsche 356 Pre- Speedster Buyer’s Tips like these, please do not hesitate to contact the team at The Beverly Hills Car Club today. Designed with you in mind, they welcome you to browse their website at your leisure and encourage you to contact them today with any questions you may have. In the meantime, be sure to browse their Porsche 356 inventory to see if they have a car that may suit your needs. They look forward to hearing from you soon and to sharing their knowledge with you.