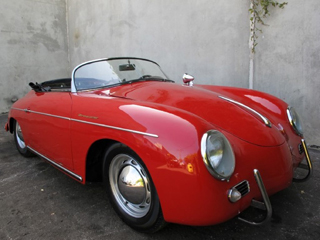 The iconic design of the Porsche 356 classic remained much the same throughout its lifespan, with evolutionary, functional improvements rather than annual superficial styling changes. Nevertheless, a variety of models were produced from 1948 through 1965 including the praised Speedster. The Porsche 356 Speedster is arguably one of the most sought-after German collector cars today. Introduced in late 1954 after Max Hoffman, the sole US importer of Porsches advised the company that a lower-cost, somewhat simple open-top version could sell well in the American market, the car was aimed primarily at the Californian market. Nearly instantly, the aesthetically pleasing two-seater Speedster with its very low screen and side windows became a classic amongst Porsche devotees, as well as a favorite with film stars such as James Dean.

The Porsche 356 Speedster is generally regarded as being the most desired of all the 356 models and to find one with the rare factory options makes this particular car an attractive and exciting investment providing exhilarating performance, and unparalleled charismatic appeal. The intrinsic beauty of a Porsche 356 classic is its functional simplicity coupled with superb engineering. Devoid of unnecessary embellishment with its rather stark interior, the Speedster interior offered just three circular dashboard instruments containing a tachometer, speedometer, and a combined fuel and oil temperature gauge, and two bucket-style seats a design unmistakably Porsche. If you're looking to buy classic Porsche models including the 356 or to buy vintage Porsche or classic Porsche models, youve come to the right place! The team at Beverly Hills Car Club has the resources to connect you with the cars you desire, even the hard to find 356 Speedster models.

Specializing in classic European and American autos, including the Porsche 356 Speedster, it would be their great pleasure to help you buy and sell in the classic auto market. Connect with their team of knowledgeable representatives today to learn more about buying and selling with The Beverly Hills Car Club.