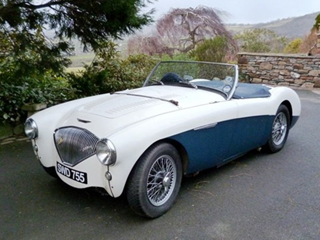 Manufactured between September 5, 1955 and July 16, 1956, the Austin-Healey 100M was a Le Mans-style special edition of the Austin-Healey 100 BN2 models. It boasted larger carburetors, a cold air box to increase airflow to the carburetors, a high-lift camshaft and higher compression pistons. These changes would help the 1955 Austin-Healey 100M produce 110hp at 4,500rpm. The front suspension was also stiffened and the front hood gained louvers, along with a bonnet belt. In total, there were 640 factory-built Austin-Healey 100M models produced all of which were BN2 series cars. The 100M components, with the exception of the high compression pistons, were also available as a Le Mans Modification Kit that could be installed on either a BN1 or BN2 series Austin-Healey 100. These kits were ordered via the company and could be installed by Austin-Healey dealers or private owners. While the kit models are still quite valuable, the factory-built 100M models are the most sought-after. Even today, as the interest in Austin-Healey 100M classics increase, there are still Healey 100 models being converted to 100M Le Mans-style examples. If youre looking to buy a 1955 Austin-Healey 100M, it is important to understand that the kit 100M cars can be both BN1 and BN2, while only the BN2 examples can be factory-built.

Interestingly, among Austin-Healey aficionados, the only cars that should properly be called 100M models are those that were originally built at the factory such as the 1955 Austin-Healey 100M. Those that were modified, regardless of where they were modified, are generally referred to as 100 Le Mans or 100s with Le Mans modifications and the M is left off the name. To ensure that you are purchasing one of the original 680 factory-built 100M models, it is essential to see the cars British Motor Industry Heritage Trust Certificate. This certificate will show that the car came from the factory with an original louvered hood. On the other hand, there are many buyers out there that will be completely satisfied with an Austin-Healey 100 that was Le Mans modified at the factory or by an owner. This is all personal preference, but it is imperative to know exactly how the car came to be or you risk overpaying for the model. Factory-built 100M models are the most valuable, followed by factory-installed Le Mans kits and those more recent conversions.

When youre ready to learn more about the 1955 Austin-Healey 100M, The Beverly Hills Car Club is standing by to assist you. Renowned in the classic car industry for their fair and honest car deals, you can count on their team of industry professionals to assist you in finding the Austin-Healey 100M that you desire. Connect today to get started!