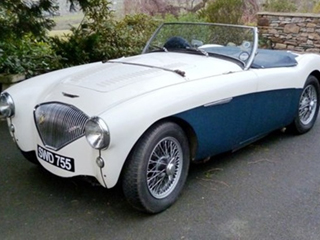 The Austin-Healey 100M Le Mans factory-built sports cars were manufactured between September 5, 1955 and July 16, 1956. Factory records indicate that only 640 of these 100M classics were made. These records, which were found in July of 1985, are based on the factory build cards, which call for a louvered hood. There was, however, a factory kit released by Donald Healey that allowed standard Healey 100 cars to be later converted to Le Mans style cars. Approximately 500 of these Le Mans Conversion Kits were sold to Austin-Healey dealers or car owners for conversion of standard 100 Austin-Healey sports cars. It is important to mention that the Le Mans Conversion Kits were based on special test cars and were first made available in 1954, before the start of the BN2 production run. Because of this, the first cars converted with the kits were BN1 models, while all of the factory-built Austin-Healey 100M models were based on BN2 models. As such, there are varying levels of value depending on the type of Austin-Healey 100M Le Mans edition you find whether an early 100 retrofitted with the Le Mans kit by an Austin-Healey dealer or owners, one of the 640 factory-built 100M examples, or a 100 that has been converted in more recent years.

The only way to truly distinguish the actual factory built originals from the others is to compare the chassis identification numbers with Austin-Healey historical records. It is always in your best interest to ask the seller for a British Motor Industry Heritage Trust Certificate. Even today, interest in conversions has been fueled by the increased interest in the original 640 factory-built models, yet they are not quite as valuable as the original factory-built examples. Sought after thanks to their rarity and high-performance, as well as by the mystique of ownership that accompanies these models, purchasing an original Austin-Healey 100M can be quite the accomplishment. Also of note is the fact that approximately 70 percent of these cars were finished with a two-tone paint scheme. In fact, a black over pink example was on display at the 1955 London Motor Show. Whether youre looking for a 100M in pristine condition or one that you can restore to exacting standards, connect with The Beverly Hills Car Club today to discuss the classic Austin-Healey 100M models currently available in the classic market.

These are just a few of the many Buyers Tips that The Beverly Hills Car Club team has learned over their years of buying and selling within the classic car industry. When youre ready to explore the Austin-Healey 100M models available to you, there is no better team to partner with. Connect with their Los Angeles classic car dealership today to get started. They look forward to hearing from you soon and to helping you find the classic 100M you desire.