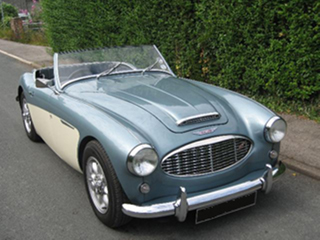 Beginning in August of 1956, the Austin-Healey brand would enter regular production with a new six-cylinder engine Big Healey that now included a pair of small occasional seats in the rear. Met with considerable criticism by the public, the 1956 Austin-Healey 100-6 BN4 would replace the previously released 100-4. Although the BN4 featured a new six-cylinder engine, because of increased weight, the car offered little improvement in performance. The chassis prefix BN4 would denote a four-seat roadster. Later in production, in 1958, a BN6 two-seat roadster was introduced. Visually, the 100-6 BN4 would offer buyers an oval grille, additional tail lamps at the rear fender, and a lengthened body to accommodate the addition of occasional seats and the larger engine. It is estimated that little more than 7,000 examples of the Austin-Healey 100-6 BN4 were produced, 59 percent of which were bound for the United States. If youre thinking about buying a 1956 Austin-Healey 100-6 BN4, youve come to the right place to learn valuable model information and important Buyers Tips for a successful purchase.

As with all classic cars of this age, when buying a 1956 Austin-Healey 100-6 BN4, it is imperative to ensure that you are indeed purchasing an original. The most efficient and effective way to go about this is to verify the engine and chassis numbers of any potential purchase against Austin-Healey historical records. Another way to boost your confidence in the model is to ask the seller for any documentation they have regarding ownership history, maintenance and service. These documents, if relatively complete, can provide you with a wealth of insight into the cars history and overall car throughout its life. Another important Buyers Tip is to find an example with as minimal amount of rust and body damage as possible. Restoration on these early British classics can be quite time consuming and costly. Often times, spending a bit more to purchase a higher quality car can save you thousands in restoration costs that may exceed the market value of the car. This is personal preference, however. The 1956 Austin-Healey 100-6 BN4 also increases in value if the optional hardtop is included. This is something to keep in mind during your search.

Backed by years of experience in the classic car industry, The Beverly Hills Car Club is all too familiar with the Austin-Healey market and can assist you in finding the 1956 Austin-Healey 100-6 BN4 that you desire. Whether youre looking for a model you can tinker with in the garage or prefer a top-quality, fully restored example for your showroom their team can assist. Connect today to get started and be sure to browse their online inventory to see the models currently available at their Los Angeles classic car dealership. They look forward to hearing from you soon!