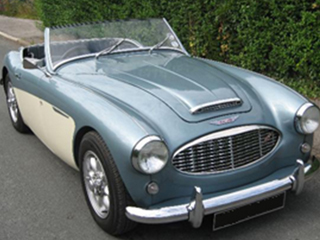 The Austin-Healey BN4 would be one of two model designations in the widely popular Austin-Healey 100-6 lineup, which was first introduced in 1956 to replace the Austin-Healey 100. The Austin-Healey BN4 would be a 2+2 model produced from 1956, while the BN6 was a two-seat model produced from 1958. The BN4s additional two seats, which were known as occasional seats, were made possible by a lengthened wheelbase that now extended two additional inches over the previous Austin-Healey 100. The Austin Healey 100-6 BN4 would be instantly recognizable to the public as a Big Healey, but would introduce several compelling improvements. Perhaps the most important change was the new six-cylinder engine. A fixed windshield and a wider radiator grille that was mounted in a slightly lower position also added to the appeal. While the 100-6 was still a powerfully performing sports car with all of the 100s sporting character, the BN4 was clearly intended to provide additional comfort for longer drives.

The 1956 and 1957 Austin-Healey BN4 models are considered part of the now-rare, six-cylinder, 2+2 Healey models from the first production series. It is estimated that approximately 7,053 Austin-Healey BN4 models were produced during this time. They are often referred to as the Longbridge Healeys because most examples were assembled at the same factory in Longbridge where the four-cylinder Healeys had been manufactured. Towards the end of 1957, all British Motor Corporation sports cars production was consolidated to the MG Abingdon plant. A very small number of these first-series BN4 models were assembled at Abingdon during the transition. It is always recommended that you compare engine and chassis numbers against Austin-Healey records or ask the seller for a British Motor Industry Heritage Trust Certificate, which will document the cars manufacturing history. As with all classics of this age, it is always best to find the most complete and best condition example you can within your budget, as parts and restoration can be quite expensive for these particular Big Healey models.

These are just a few of the Buyers Tips for the Austin-Healey BN4 that The Beverly Hills Car Club has learned over their years of experience in the classic car industry. Whether youre searching for a mint condition BN4 or prefer a model in need of a bit of restoration, connect with their team today to explore the options currently available to you within their Los Angeles classic car dealership inventory. They are just a phone call away and look forward to sharing their knowledge and expertise with you. Contact them today to get started!