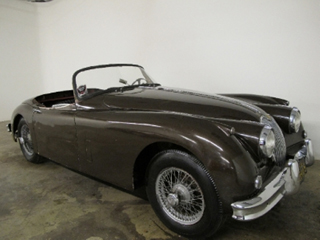 Although having a family resemblance to the Jaguar XK120 and XK140 models, the 1958 Jaguar XK150 Roadster, the first year of the XK150 production, was radically modernized. Some of the changes to this third-generation of the XK line included a one-piece windscreen, which replaced the previously split screen, and the wing line no longer dropped so dramatically as it moved over the doors. The front hood was also widened and on the Roadster, the bulkhead was moved back almost four inches to make the hood longer. This was quite a dramatic move for a car that was already known for the exaggerated length and lines of its hood. On the inside, the walnut dashboard found in previous XK140 models was replaced with one trimmed in leather and thinner doors gave more interior space. The standard engine, the 3.4L straight six was used in the XK150, however most of the Roadsters were fitted with the SE engine that had a modified cylinder head and larger exhaust valves, which gave increased horsepower.

One of the most important advancements to be released on the 1958 XK150 was the adoption of Dunlop disc brakes. In fact, these were often the focal point of the sales brochures, explaining how the disc brake was first used on the Le Mans-winning C-Type of 1953. The 1958 Jaguar XK150 Roadster was a high performance, well-appointed sport touring car that could cope with long distances at peak performance and buyers lined up to purchase it. Today, the Jaguar XK150 Roadster continues to be one of the most sought-after Jaguars in the classic car market. Along with its siblings, the XK120 and XK140, the XK150 Roadster is a staple for many concours delegance, prestigious car auctions and classic car publications. If youre ready to own a piece of this illustrious history and are ready to put a 1958 Jaguar XK150 Roadster in your garage, The Beverly Hills Car Club is standing by to assist you. Armed with years of experience assisting buyers and sellers of classic cars around the country, their team has the knowledge, resources, Buyers Tips and industry connections to help you find the perfect Jaguar to suit your needs.

Their team encourages you to tour their website to view online inventory and to learn more about the 1958 Jaguar XK150 Roadster. Should you have any questions or would like to speak with a representative directly, the California classic car dealership professionals at The Beverly Hills Car Club are just a phone call away. Connect today!