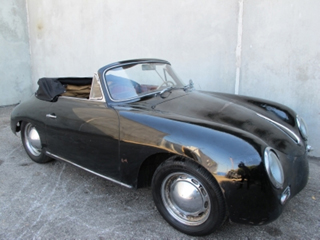 During the 1958 production year, approximately 1,381 Porsche 356A Cabriolet models would be produced, compared to more than 3,300 Coupe models. This production-year also marked the release of the T-2 body, which had very few visible differences when compared to the previous 356A body style. The most notable change was the lower repositioning of the door striker plate and the fact that the two exhaust pipes now exited through the lower part of each bumper guard. This was also an important year for the Cabriolet, as it now sported new vent windows that would not be seen on the Coupe models until 1960 with the T-5 body style. For Porsche enthusiasts and classic car collectors, the 1958 Porsche 356A Cabriolet is a highly desired auto. With limited production and the open-air driving experience, it is easy to understand why. It is important to mention that the Cabriolet is different than the Speedster – the Cabriolet being the soft-top version of the Coupe. The Speedster is a special production model that features a removable windscreen and has slightly different styling in certain areas.

Because of the limited production numbers, the 1958 Porsche 356A Cabriolet is a bit more difficult to find than its Coupe counterpart. When you find a Cabriolet model for purchase, however, always be sure to authenticate it by checking the engine and chassis numbers against Porsche records. The team at The Beverly Hills Car Club can assist you in locating both the engine and chassis numbers of any prospective purchase. This is vitally important, as there are many replica and kit cars designed to look like the Porsche 356. These early Porsche 356 models were also prone to rust, as little to no rust protection was used during this era, so you should be sure to include a check for rust during your inspection. Some of the areas that are most prone to rust include the front and rear floorpans, the suspension mounting points and along the longitudinal chassis members to name just a few.

For more information on the 1958 Porsche 356A Cabriolet or to learn more important Buyer’s Tips, please do not hesitate to contact the team at The Beverly Hills Car Club today. Their team of California classic car dealership professionals looks forward to hearing from you and to sharing their knowledge with you. From fair condition 356A Cabriolet models worthy of restoration to the most pristine, museum-quality specimen, their team stands ready to assist you. Connect today to get started!


We Also Buy Classic 1958 Porsche 356 A Cabriolets In Any Condition, Top Dollar Paid.