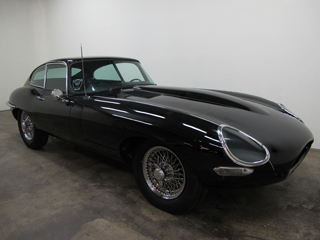 Launched in 1961, the Jaguar E Type is also known as the Jaguar XKE in the United States. Presenting owners with sleek styling that reflected the finest Jaguar racecars of the era, the 1963 Jaguar E Type (and other year models) quickly became one of the most renowned sports cars of its time. Attracting only the most affluent and fashionable buyers of the time, even world-renowned Enzo Ferrari said the Jaguar E Type was “one of the most beautiful cars ever made.” Producing 150mph, the Jaguar E Type was also able to push the limits of supercars costing more than twice the price, an added benefit to those who fell in love with the car’s styling. Throughout its thirteen-year production, more than 77,000 units of the Jaguar E Type would roll off the production floor. To differentiate between model runs, the 1963 Jaguar E Type generally falls into the Series I cars, which included those manufactured from 1961 to 1968. The 1963 XKE used the same engine that had been proven capable in the XK150s, a 3.8L six-cylinder. Starting in October 1964, a 4.2L engine would be used.

If you’re considering buying a 1963 Jaguar E Type, you should have no problem finding the perfect example for your needs, as there were more than 77,000 Jaguar E Types produced throughout its thirteen-year run. Perhaps one of the most common problems with these classics, as with many classics manufactured during this time, was rust and corrosion. Because no rust proofing was done during this time, these cars were not undercoated and none were galvanized. Doing your research and finding and example that has little to no rust can be extremely beneficial whether you’re looking for an everyday driver or a restoration project. The second problem you’ll want to be prepared for is issues with the Lucas electrical system, which are known to be unreliable. Cooling system issues were not addressed until 1967, so if you’re purchasing a road-worthy model, you’ll want to ensure the cooling system has been upgraded to the 1967 components as well. Other mechanical items to discuss with your mechanic are blocked waterways, worn timing chains, and rear crank oil seals. To learn more about these and other Buyer’s Tips for the 1963 Jaguar E Type, the team at The Beverly Hills Car Club encourages you to contact them today!

In the meantime, the team of California classic car dealership professionals at the Los Angeles based Beverly Hills Car Club encourages you to browse their online inventory. They are just a phone call or email away and look forward to hearing from you soon! Connect today!