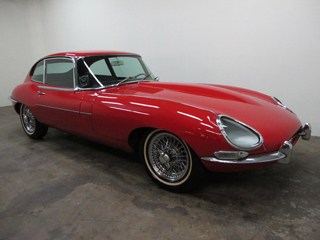 During the late 1960s, many of the changes that were incorporated into the Jaguar E Type were a direct result of United States federal regulations on emissions and safety. Following the launch of the Jaguar E Type in 1961 an unofficial “Series 1 ½” was released from 1967 to 1968 to bridge the gap between the widely popular Series 1 early Jaguars and the upcoming Series 2 cars. The 1967 Jaguar E Type was actually very similar to the previous 1966 model and the other Series 1 cars, however federal regulations did cause some changes. Mechanically, the twin Zenith-Stromberg carburetors were now fitted with a hot intake tube that was connected to the exhaust manifold. This change did reduce the horsepower slightly, but the car was now able to meet the guidelines needed for Jaguar to continue sales in America. These “federalized” cars, as they are nicknamed, can be recognized not only by their carburetors, but also by the use of new cam covers with raised fins, toggle switches inside the cabin instead of rocker switches, and the new collapsible steering column. Sadly, the 1967 Jaguar also marked the end of the famous Jaguar starter button on the dash. A traditional key start was now standard.

Jaguar never recognized the Jaguar Series 1 ½ as an official designation, but it has become an unofficial way of distinguishing the 1967 and 1968 models from early Series 1 models. Three body styles were also available during this time, including the Roadster, the Fixed Head Coupe, and the Fixed Head Coupe 2+2. Between 1964 and 1968, more than 22,900 models were released. The Roadster was the clear favorite, while the 2+2 configuration failed to be the success that Jaguar had anticipated. In fact, only 5,598 of the Series 1 2+2 models were ever produced. If you’re considering the purchase of a 1967 Jaguar E Type, it is imperative to check the documentation and chassis/engine numbers, as some of the Coupe models have been cut down to look like the popular Roadster model. Many unsuspecting buyers have been taken advantage of in this way. Other Buyer’s Tips include checking the car thoroughly for rust – as with any classic from this era – and having the car inspected by a qualified Jaguar mechanic. If you’re searching for a quality example for your next restoration project, also be sure to inquire about the parts and components are included in the sale. Jaguar parts from this era can be found, but they are often expensive.

To learn more about the 1967 Jaguar E Type, the California classic car dealership professionals at The Beverly Hills Car Club welcome you to browse their website at your leisure. Should you have any questions, they are always just a phone call or email away and look forward to sharing their knowledge and experience with you. Connect today!