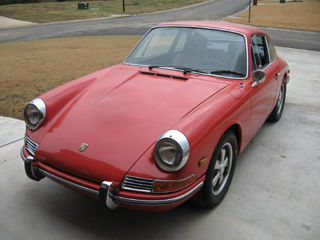 If you’re thinking about buying a 1968 Porsche 911 S, The Beverly Hills Car Club has provided you with the following Buyer’s Tips and Buyer’s Guide to assist you in your search. After manufacturing the Porsche 356 for the first seventeen years of its life, by the early 1960s, Porsche enthusiasts were ready for something new. The German manufacturer tried to accommodate the growing demand briefly with the 356 Carrera, but the model was no answer for mass-production. Enter the Porsche 911. Developed under the internal type number 901, the Porsche 911 was evolutionary of the 356, yet with better visibility, more cabin space and a new 2.0L flat six-cylinder motor that gave owners approximately 40 more horsepower than the 356. While the early Porsche 911 models had the same vintage charm as the 356, they were undeniably powerful, stylish and modern for their time. The epitome of the 911 line is often considered to be the 911 S, which was launched in 1967.

During 1968, Porsche released three new variations: two for Europe and one for the United States. The American model was the Porsche 911L, which replaced the 911S due to emissions regulations which forced Porsche to stop exporting the 911S during this time. The L stood for luxury and was basically an S model with a normal tune engine. The Porsche 911 S would return to the American market the following year. If you’re looking specifically for a 1968 Porsche 911 S, the models you will find will be those that stayed in Europe, many of which are right-hand drive. Like all classic cars of this era, one of the main issues that plague buyers is rust. Because these cars were manufactured prior to new protocols for rust protection, it is not uncommon to have to view several 911 S models before you find the right one for you. The Beverly Hills Car Club professionals always recommend having a third-party inspection to gain as much information on the 911 as possible, which includes placing the car on a lift to check the underbelly and chassis for rust. Some rust damage can be repaired, but with the wide selection of 911 models available in the classic car market today, it behooves buyers to purchase the best example they can find that fits within their budget.

When you’re ready to explore the 1969 Porsche 911 S models currently available to you, the California classic car dealership professionals at The Beverly Hills Car Club look forward to hearing from you. Based in Los Angeles, their team knows the classic car market better than anyone. Let them help you find the car you’ve always dreamed of. Whether a barn find for restoration, a mint-condition example or anything in between, they look forward to sharing their knowledge and resources with you. Connect today!