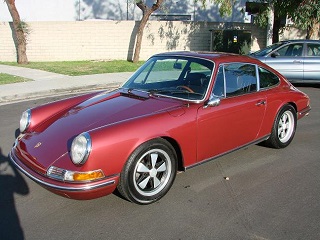 The Porsche 911 trio was sorted out on both sides of the Atlantic in 1969 with the release of the 911 T and 911 E and the return of the 911 S; the trio would run for three model-years. Prior to 1969, the Porsche 911 S had been taken out of the American market due to emissions regulations. The 1969 Porsche 911 S was re-released with much anticipation, offering a top speed of 140mph and a base price of $7,895 for the Coupe version. The revived 911 S also offered fuel injection, which married high performance with low emissions. Another change for the 911 S was that it was only available in five-speed, whereas the 911T and 911E were offered in Porsche’s Sportomatic transmission and four- or five-speed manuals. The 911S also had slightly higher compression and reshaped inlet passages, in addition to an extra oil cooler for greater reliability and higher power. These upgrades, paired with beautiful styling and aggressive, sporty handling, led the 1969 Porsche 911 S to be one of the most sought after in the late 1960s Porsche lineup.

These early Porsche 911 models continue to be the most sought after even today. Though the 911 spans more than 50 staggering years, the first-generation 911 models (1964-1989) often speak to collectors, as they offer the purest link to the car’s roots. The clean and focused design, low weight and air-cooled engine are some of the main draws. In fact, the 1960s 911 models have risen dramatically in value, and some of the finest examples of 911 engineering are found within this era. The 1969 Porsche 911 S is of particular interest to collectors due to the fact that it was the first time the 911 S was offered with mechanical fuel injection. With so many 911 models to choose from, finding the right one for you often comes down to assessing your expectations of performance, determining how much restoration you want to take on, and finding a car that suits your budget. The 1960s models are particularly prone to rust, so this is often a factor if you’re considering a 1969. Furthermore, one of the perks of buying an S model is the tuning upgrades that were done. You’ll want to check the car’s mechanics are as intact as possible and that they have been maintained throughout the years. The other option is to purchase a 1969 911 S model that has undergone a restoration or has a rebuilt engine.

These are just a few of the Buyer’s Tips for the 1969 Porsche 911 S that the team at The Beverly Hills Car Club can provide you when you choose to partner with them in the search for your next classic auto. To learn more about their services or to view their current inventory, please do not hesitate to browse this website at your leisure. Should you have any questions, contact their California classic car dealership today!