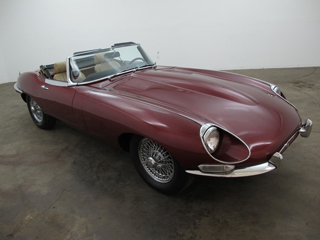 With a production lifespan lasting more than thirteen-years, the Jaguar E Type is one of the most breathtaking classics to come from the British car scene in the 1960s and 1970s. First introduced to the public at the Geneva Auto Show in 1961, the E Type’s distinguished styling, paired with its sports performance and affordable pricing, propelled the car to become an instant classic. The 1970 Jaguar E Type (and other year models) had a huge appeal not only in the American market, but also throughout Europe. In fact, each year more than 5,000 examples would roll off the Jaguar production floor. Part of the Series 2 models that were released from 1969 to 1971, the 1970 E Type can be identified by its open headlights without glass covers, due to U.S. safety regulations, and by its larger air intake grill, which allowed for better engine cooling. Other updates for this model year included the re-positioning of larger front indicators, taillights that were now found below the bumpers, and upgraded brakes. Purists did complain about one new feature: new, more comfortable seats. They said these new seats lacked the style and classic design of the original Jaguar E Type seats. While many have left their 1970 E Type seats alone, some owners opted to return to the previous ones.

Because the 1970 Jaguar E Type has some systems and components that are far different than their American counterparts, there are a number of items that should be considered when buying a 1970 Jaguar E Type. The Beverly Hills Car Club outlines some of the most important Buyer’s Tips here on their website. One of the major concerns on the 1970 E Type is the brakes. Brakes on this car are rear inboard brakes, and any serious work on them requires the removal of the entire sub frame. What many folks don’t realize is that there are far more moving parts on these brakes compared to those on American cars of the day and repairing or replacing them can be quite time consuming. Due to high production, parts are generally easy to find, but they can be costly depending on the item. The other major concern on these cars is rust – as with all 1960s and early 1970s cars from Europe. They were not galvanized or undercoated, and because the body tub provides a lot of structural support for the car, a thorough inspection should be completed prior to any purchase

These are just a few of the many Buyer’s Tips that The Beverly Hills Car Club has learned over their years of experience in the classic car industry. To learn more about the 1970 Jaguar E Type or to view the models currently available in online inventory, please feel free to browse this website. Should you have any questions, the team of California classic car dealership professionals is standing by to take your call. Connect today!