Selling or Buying a Ferrari 330? 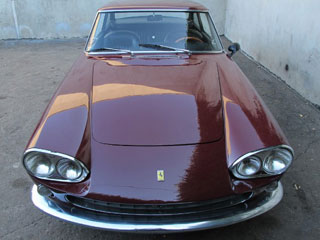 The Ferrari 330 GT 2+2 was introduced in January 1964 at the Brussels Show to replace the Ferrari 330 America. The design was different, featuring a longer wheelbase, sharper nose and tail, a wide grille and quad headlights. The handling was improved by the use of Koni adjustable shock absorbers and a Dunlop dual circuit braking system with discs was used all around. Between 1966 and 1968, Ferrari was offering a Ferrari 330 GTC and a 330 GTS. Those two models shared the short wheelbase of the Ferrari 275, and the independent rear suspension mount. Being quieter and easier to drive than previous Ferrari models, the 330 GT models were comfortable and refined vehicles. They remain popular today.

In 1963, Ferrari built four examples of a 400hp vehicle called the Ferrari 330 Le Man Berlinetta also known as 330 LMB, or 330 LM. These models didnt race for a long time as Ferrari was shifting to mid-engine layout for their racing cars. Ferrari then built four mid-engine racing vehicles using the Ferrari 330 engine and named them 330 P, P2, P3 and P4. The latest delivered 450hp at 8,500 rpm for a weight of 1,763 lb, resulting in a top speed of nearly 200mph. If youre looking to buy a Ferrari 300, call The Beverly Hills Car Club today for more information! They are always available for consultation and have the industry connections and resources to help you find the classics youve been dreaming of. Connect today!