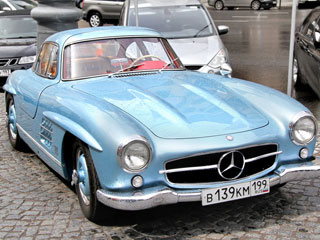 The redesigned 300SL roadster was not only functional, but also breathtakingly beautiful. In fact, production of the 300SL Coupe Gullwing began to wane as news of the roadster began to spread. The 1960 Mercedes Benz 300SL – along with the other model years from 1954 to 1963 – was not only the epitome of a classic roadster, but instantly became a classic icon in automobile history. From February of 1957 to February of 1963, Mercedes produced 1,858 units with only 249 units being produced in 1960. Offering a fuel-injected 2,966cc six-cylinder engine capable of producing 215 horsepower and a four-speed manual gearbox to send power to the rear wheels, the 300SL Roadster and its sister Gullwing Coupes were some of the most desired cars in their day.

Considered the second generation of the 300SL, the 1960 Mercedes Benz 300 SL is also referred to as the W198 II, while the 300SL Gullwing was referred to as the W198 I. If you are looking to buy classic Mercedes, there is no better model to consider, as the Gullwing and 300SL Roadster are the epitome of classic Mercedes post-war autos. Some of the more rare optional features to look for when purchasing include the custom hardtop, the rare Rudge wheels, and even more rare, the high performance engine. Because of the rarity of these vehicle, The Beverly Hills Car Club encourages buyers to have a third-party inspection performed to ensure validity and also encourages a throughout inspection for rust. Additionally, examples with full records and detailed history of owners and locations is a great bonus.

Purchasing a 1960 Mercedes Benz 300SL can be one of the most exciting times of your life. You’ve worked hard to be able to afford such pleasures in life and you should stop at nothing to ensure you find the car of your dreams. The team at The Beverly Hills Car Club looks forward to hearing form you and to assisting you with all your automobile needs. Connect today!

And We Pick-Up Anywhere In The USA.