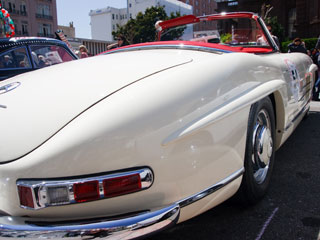 Produced from 1954 to 1963, the second generation of the Mercedes Benz 300SL includes the 1958 Mercedes Benz 300SL and is considered to be one of the most sought-after autos among European classic cars today. Generally speaking a road car comes first and a racing version follows, but the radical Mercedes 300 SL Gullwing that hit the market in 1954 was directly derived from the sports racing car that won the Carrera Panamericana and the 24-hours of LeMans in 1952. The road car retained the racing versions strong tubular frame with high sills and featured fully independent suspension and a fuel-injected version of Mercedes Bens 2,995cc single-overhead camshaft engine.

Fast, beautiful, and very expensive at nearly $9,000, only 1,400 of the exclusive coupes were built between 1954 and 1957. When the company introduced the 1958 Mercedes Benz 300SL, the open two-seater offered a modified frame and conventional doors. Power also went up slightly and the swing axle rear suspension was modified to improve handling. A very popular option for these cars was the snug hardtop, while the most notable changes during production where the introduction of four-wheel disk brakes in 1961 and an aluminum engine block by the end of 1962. By the time the Mercedes 300SL Roadster was discontinued in 1963, approximately 1,858 had been built.

Many enthusiasts rate the open the 1958 Mercedes Benz 300SL and its sister models from 1954 to 1963 as the superior car to drive, due to its great power and more predictable handling. The Gullwing Coupe, however, endures as one of the most iconic postwar automobiles. Whether you’re looking for the 300SL Roadster or the 300SL Coupe, the team at The Beverly Hills Car Club wants to assist you in finding the ideal car for your desires. Connect with them today to learn more and to explore the cars currently available to you.

Pick-Up Anywhere In The USA.